Growing Importance of Understanding Chinese Culture
With growth of China economy and its increasing influence on the world, Chinese Management, philosophies and culture come into greater attention worldwide. Many people agree with British Historian who said that 19th century belonged to the British, 20th century belonged to the US and the 21st century would belong to China.

The culture and philosophies have much influence over the management. In the last two to three decades, there were many academic studies and research comparing the management and thinking of East and West. There are increasing number of books that cover such topics.

Objectives of Understanding East and West Cultures
For most of us who are outside the PRC and Taiwan regions, we are educated and influenced mostly by the Western mindsets. Why do we want to learn about East or Chinese culture and thinking?

The Model of Philosophies Influence on Management 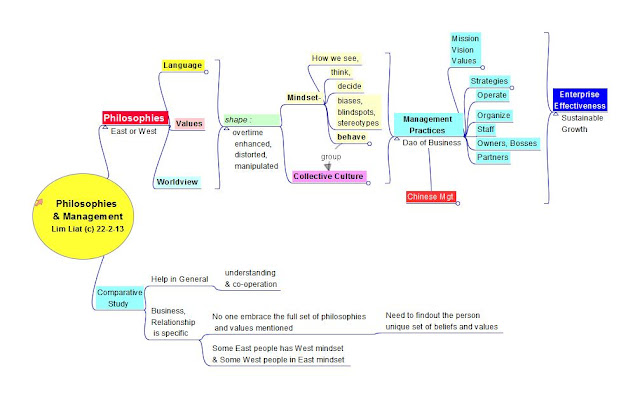 A quick way of understanding East or West is by comparison.

One of the best in the lifestyle and behavior of East vs East in picture forms is the work of Yang Liu on "East meet West". Do a google search for "East meets West by Yang Liu".

But you have to watch out that no one person fully embraced the full set of philosophies and values of their heritage. For each person, we still need to find out exactly what is his/hers.

The best way to study and compare East vs West or any culture is to follow the above model proposed.

In this series, I want do more on item 2 "learning the best" from the Chinese Culture, Values, Philosophies and Management.

I shall cover the following main topics in this series of posts.

4. Fusion of East & West Thinking:
A fusion of East and West Mindset can be read at East West Fusion Mindset as a Key and as Simple as ABC.