The Chinese Ways of Influencing People

Dale Carnegie wrote a best seller names "How to Win Friends and Influence People" back in 1936. Among the Chinese, there is a saying that was attributed to Confucius (only a subset came from him) about how to influence too. Here is an analysis of the saying.

The Chinese Saying on How to Influence People:
诱之以利，晓之以理，动之以情，胁之以威，授之以渔，绳之以法，导之以行，勉之以恒，持之以恒，学之以恒，行之以德，道之以德，齐之以礼，有耻且格。

The Translated English Version in mind-map: 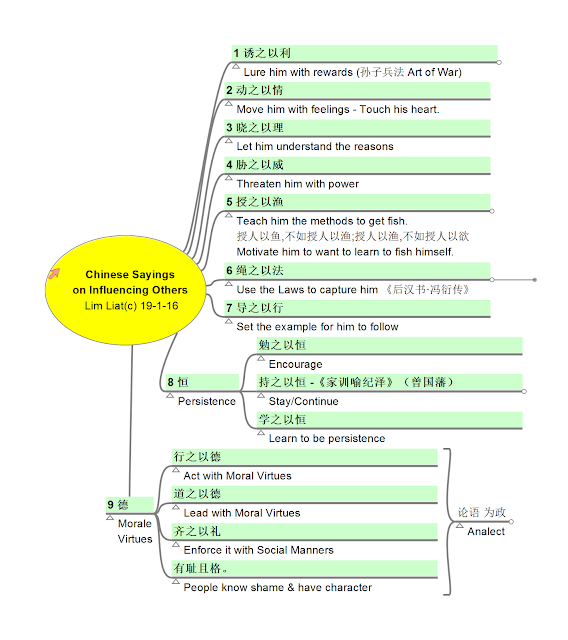 The fastest and easiest way to get people to do what you want is to offer some benefits to him, typically gifts or money. In smaller way, it if about tipping. In bigger way it could be as bad bribery. It is quite typical in old Chinese times to give something to the man in charge to expedite your requests. It is like paying more for 1st class service. Such is usually not considered bribery in the Chinese society. However, in western world it will be, unless the service is classified into classes like the airplane tickets or hospital beds.

The 2nd way is to touch the heart and go by relationships. Giving face, giving respect and honor are important to influence others. It is feelings before reasons. You need to earn the trust before you can be heard. This is like Stephen Covey 5th habit of seeking first to understand and then be understood. It is grace first before truth in the Biblical teaching.

The 3rd way is the reasoning. Why should he or she do what you suggest. What are the benefits and what are the harms of not doing.

The 4th way, if the above 3 ways still do not work, is to show your power or pull your rank as they say in the army. Because you are the boss, therefore he better listens.

The 5th way, perhaps should be included in the 3rd way of reasoning, is to teach him how to fish besides giving him the fish to solve his immediate problem. This saying is repeated by Stephen Covey and others in their books as well. However, the Chinese saying goes a bit deeper. It is about motivating the person to want to learn about fishing in the first place. We have the saying of you can bring the horse to the pond but you cannot force the horse to drink.

The 6th way, if the all the above fails, is to bring out the laws. Using the laws for enforcement is usually the last resort for the Chinese. It is always best to start on friendly terms by giving respect and giving face. Even appealing to give and take, you help me this time and I will help in later times. We have the children story of the rat begging the lion not to kill him and later saves the lion from the net.

The remaining ways are methods to help the person to be better and stronger in character.  It is about (7) setting the example for others to see and follow, (8) encouraging the person to carry on and not to quit half way, (9) encourage people to change from inside out - building a strong character by soft motivation of drawing, appealing to social conscience, rather than outward enforcement by laws. Laws is effective in getting short-term adherence but is not effective in long term self-driven adherence. We don't steal not because we will be put in jail but because we are morally upright person. Even when there are no one watching, and no CCTV recording, we will not steal even if the easy opportunity arise. e.g. picking up lost wallets and returning to the owner.

The Carnegie's Methods:
For comparison and to complete the topic of influencing people, here is mind-map of 12 principles : 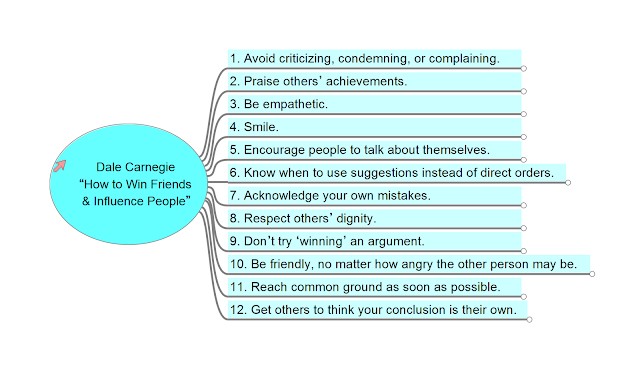 Which One to Follow? The East or the West?
There is no need to choose. Roughly speaking, the Chinese ways address the strategic issues, and the Carnegie's ways address the techniques. You should combine them and apply the right way according to the situation, the issues, and the personalities of the people involved. Such situational analysis first and tailoring to the specific of the people involved and affected is the mindset and way of the Chinese. It is the key and main teaching of Sun Zi's Art of War.  (See V Sun Zi and Other Strategists(Gui Gu Zi)

If you want to be winners, win friends and influence people, follow the teachings recommended here.

A good 2016 New Year resolution might be to pick up mind-mapping to organize and grow your knowledge better. This post shows how this can be done.

I subscribed to Geoffrey James of Inc.com posts. We should do subscriptions to the thought leaders of the topics that are of interests or important to us.  In his recent email, there is the topic, 33 Easy Ways to Avoid Stress in 2016 | Inc.com. Now, 33 ways are a lot to remember. What we usually do is to scan through the list and pick up some tips that may be of importance to us and forget the rest. That is throwing away a lot of knowledge.

As I am a trainer and consultant, I like to make sure that my knowledge on any topic to be comprehensively broad and also be of practical details and depth. So I must have a way to organize and grow the knowledge.  The mind tools to use is a software mind-map. Hand drawn mind-map could be useful if knowledge do not change. Once a knowledge has reached a reasonable stable state, you can invest the time to redraw the mind-map in a beautiful and attractive form to share and teach other. However, for a dynamic and growing knowledge, we need a tools that is easy to re-organize and grow with the growth. Computer based software mind-map is such a tools. Try the free Freemind or Freeplane.

Back to the list of 33 ways. I need to way to re-organize them into small groups for easy of remembrance and recall. My spending a bit more time, we can find some similarity among the 33 ways to regroup them. It so happens that I have a Whole-Man model about human behavior, which essentially is body, mind, heart and relationship. So I will start with my Whole-Man model to regroup them. Here is the result of the 33 ways regrouped. 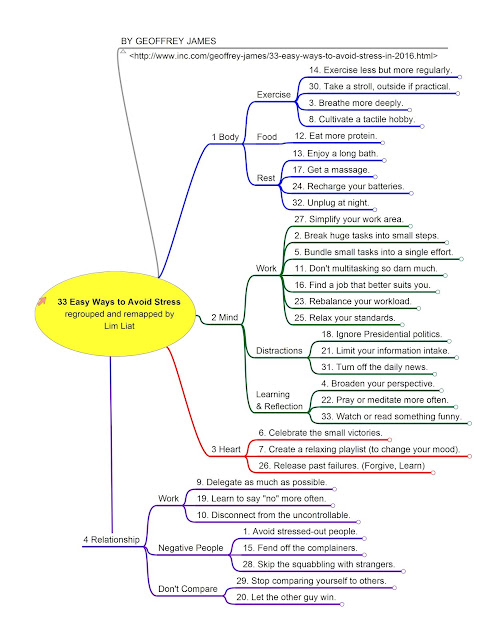 How do you find the re-org mind-map version? Does it help you to remember and relate better?

When I do a search on my computer to find related maps on stress, I discovered I have one done before already. So I just merge the two maps together with some rephrasing and grouping and this is the latest map that I got following the color and format of my earlier map on stress: 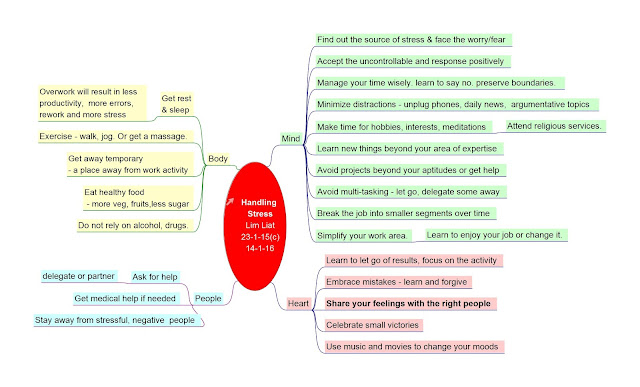 Hope you find the latest mind-map on "Handling Stress" a lot easier and richer than the linear list of 33 ways that we started form.

Hope you can adopt this mind-mapping way of building up your knowledge and that you can be assure to be wiser and wiser over time.

New Year good wishes may encourage us but could remain as such, just wishes only.

But if you have some word of wisdom to live by, then such wishes can become a reality.

One such word of wisdom is

荀子說：“君子役物，小人役於物。”
Xun Zi said, "Winners use things but loser is used by things."

莊子說：“物物而不物於物。”
Zhuang Zi said,  "Use things and be not used by things. '
If thing=money.
Winners put money to good use whereas losers are enslaved by money.

Thing=hobby.
Some spend all their time and money on their hobby... more and more golf sets, camera, or HiFi equipments and no time for family or friends.

Thing=career or work ...
More and more time spent on work and less and less time for other things.
Just one more promotion, one more better quarter, more revenues or profits ....

Review and take control over your life and be not enslaved for this New Year.