Uncovering the Mystery of Dao De Jing - The Discovery of Truth

Dao De Jing is a writing that is easy to read and yet deep in mystery. Here is an attempt to uncover the mystery that you may find the great wisdom within.

There are some writings that though we understand the written words yet we don't understand their meaning. We cannot grasp what the author is trying to say. For example, the many parables told by Jesus as recorded in the Bible. The 'unfortunate' part is that the meaning of the parables is explained by Jesus later and thereby removing the mystery.  In the Chinese literature, there is the book, Dao De Jing, written by Lao Zi, that I think it exhibits the similar characteristics of a deeper mystery and meaning. Let just start with the first chapter. The Chinese words with literal English translation are as follows:
I think we have no problem with understanding what is written. The key is what does it mean? Why so mysterious?

To help us understand it better, I will give a title to the chapter, "The Pursuit of Truth and the Limitation of our Language".

The book of Dao De Jing is written to explain the Way (of Heaven and Earth, and of People, that people should follow that Way for peace and well being). Recognizing that the language we use is but an abstraction of the reality, it starts the book with such a qualification first. It is telling us to not just read at the surface but to go deeper with reflection to discover the real truth. So, after giving the warning, Lao Zi boldly presented his understanding of the way with various examples and analogies later.

So, by putting it additional explanations, perhaps I can uncover the mystery hidden in it.
In the sequent chapters, Lao Zi wrote his discovery and observation of the Way for us to understand that we may be careful to follow and not violate the Way.

The Lessons Learned:
The next question that we may ask is how can we benefit from this understanding of Dao De Jing? What are the lessons learned? How can they be applied in our life? Applying the wisdom will lead greater productivity and fewer conflicts in business and home.
Lim Liat (c) 21 Feb 2014

What else can Meg Whitman Do for HP? I-Ching can tell you.

To look for more, you can google on the above stories and work out additional turnaround strategies. However, there is a great book of wisdom on turn-around strategies and more. That book is I-Ching, the Bible for and of Change, and is the root of Chinese philosophies and wisdom. Here is the mind-map that mapped the turnaround strategies of Meg Whitman to the relevant I-Ching Hexagrams and more. You need to read the mind-map carefully to understand more. If you have done some work on the turnaround of Apple, IBM, Xerox, you will find their strategies are covered in I-Ching. Of course, strategies must be executed in details with domain knowledge to be really successful. But I-Ching does point you to the right directions. 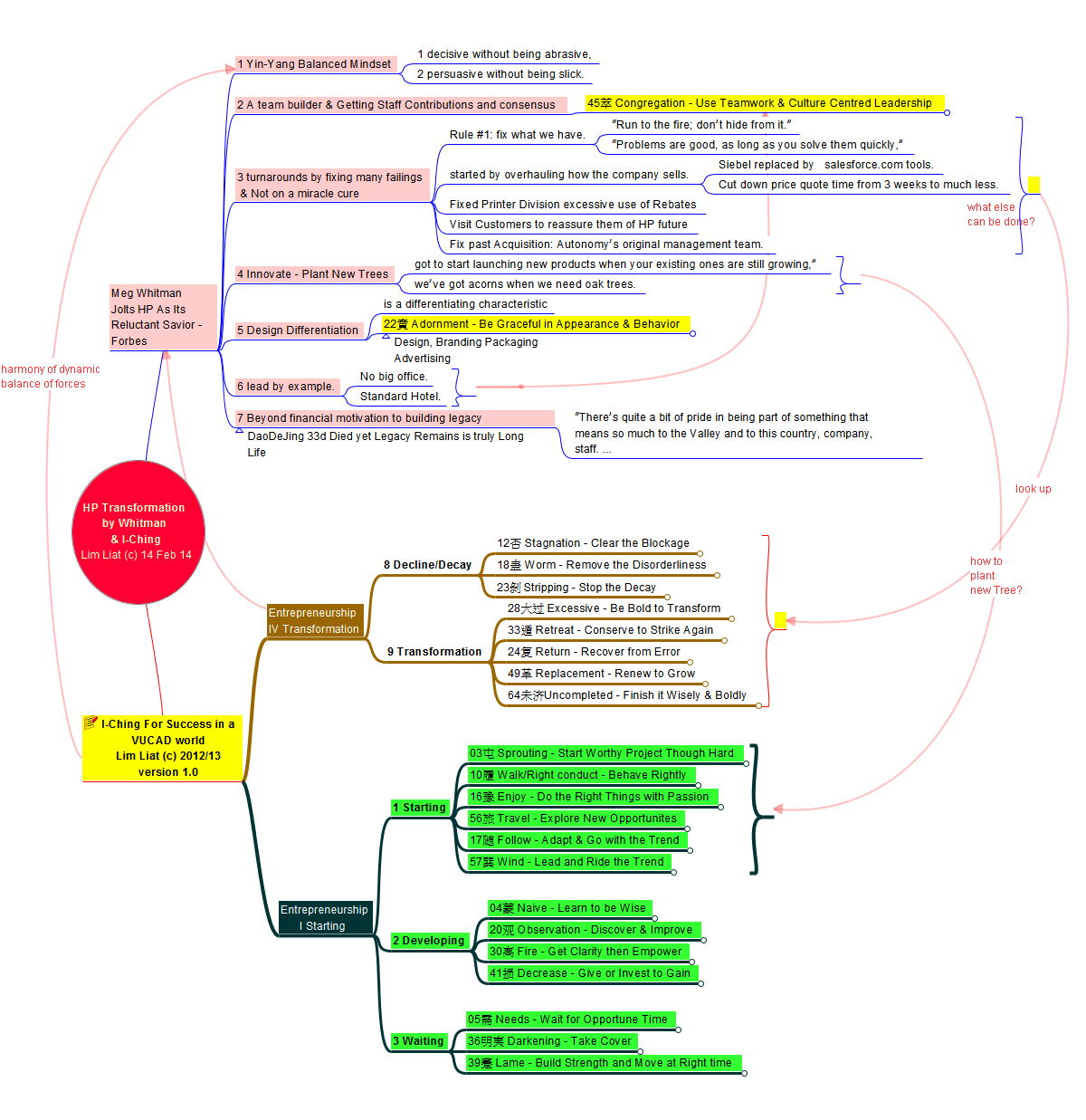 Each of the I-Ching Hexgrams contains a description of the hexagram and 6 more lines of wisdom for further actions. You can buy my book "I-Ching for Success in the VUCA World" to know the details or read the following blog posts: Making I-Ching Come Alive! The Key Principles & Applications and for even more Ancient Chinese Wisdom.

I-Ching gives us 6 types of prisons that also reflect the life story of those great men and women that started with almost nothing, achieve great success, and ended with a great fall. Heed the wisdom of I-Ching to get success and sustain it.

It is commonly acknowledged that the greatest sin is Pride. Pride is the downfall of many greats, including even Satan, the chief of the devils, according to the Bible. Then there is the saying of 3G temptations that bring down many greats too. The 3G stands for Glory, Gold and Girls(or Guys). Glory is related to Pride. Gold is related to riches and wealth. Girls/Guys is related to sexual lust. In I-Ching, there is a hexagram #47 困 Boxed-In or trapped that give us 6 types of prisons. They are:


The 3 Prisons that We may have Igorned

Compared with the 3G(Glory=Power, Gold=Riches, Girls=Pleasures) mentioned earlier, the three new prisons introduced by I-Ching are Darkness, Hardship/Oppositions and Anxiety.

The Life Story of Those Great Men/Women that Fall
There is also a progressive relationship among the 6 types of prisons (this is a principle teaching of I-Ching). The beginning prison of darkness is the lack of knowledge. When we get smarter and richer, we may be trapped in pleasures. However, if we get smart and break free from it by continue to work hard and expand, we then encounter the next stage of more and more opposition. Overcoming obstacles and hardships brings forth riches and riches bring forth power. Now that we have riches and power, we may begin to worry about loosing them. Is not this the life history of many great men and women that started with nothing? If only they study and heed the wisdom of I-Ching, they may be able to maintain their success and progress to a greater height instead of the big down fall.

For more on I-Ching, see Making I-Ching Come Alive! The Key Principles & Applications
and even more with Ancient Chinese Wisdom

The "Uninvited" Chinese New Year Party Incidence is a good case for understanding the East and West Mindsets. The incidence is described in Channel Newsasia Report .

The comparison between East (at least Chinese) and West is in the East West Fusion Mindset as a Key and as Simple as ABC. Note point 5 of the slide.

For the Chinese mindset, giving face and maintaining good relationship are more important than being right. Hence, so what if there be any errors, let's keep the relationship first and give others the face and respect. Once we have the relationship and trust, talking reasons will be more easily accepted. For the person with the Chinese Mindset, he will ignore the mistakes (outdated invitation list) and not make any corrections at all. i.e. no such 'uninvited' apology. Correction comes later, even if a 2nd party is needed.


Western mindset is more concern about reasons and doing the right things. Any errors must be clarified and fixed. The possible impact on relationships and giving face are not considered. So apologies were sent to ensure the party could be done according to the original intention.


This is not a post to judge which is better or right. This is just to show how different mindsets will handle the incidence differently. What do you think?

How would you handle the case ?


A European friend said she saw it as a personal relationship rather than a business issue. If it is a business issue, then the rational put it correct 'uninvited' would be needed. However, if it is a personal issue, then one should not 'uninvite'. This does not invalidate, but rather support the difference between East and West mentioned here. Chinese see business and personal relationship as one whereas the West see them as separate. For the Chinese, relationship comes first before business. For the West, business usually can come first, and then friendship may  or may not be formed. They are separate issues. Business is about rational issues.