According to Sun Zi, winning a war is just the start of rebuilding and gaining over the people. Planning for war is not just about how to win but also about how to takeover and rebuild after the occupation.

A typical misunderstanding on Sun Zi's Art of War is that it is about winning wars. But real scholar of Sun Zi will know that Art of War is about maximizing net-returns with minimum risks. Best strategy is not winning all the wars all the time but rather winning without even starting a war! War is the last resort when there is no choice. There are many ways besides war to resolve conflicts, such as by strategic development of one power, by foreign affairs of negotiations, economics and other social means. However, it one have too, Sun Zi's advice is to plan and calculate such that we can be sure of winning before we start it.  Winners plan to win first before starting it. Losers start a war and then try and hope to win it. By further extension, winning is not the final outcome of war. Winning is just a means to enlarge and increase one's original objective of maximizing net gains at minimum risks. There are much rebuilding after one has won and taken over the city or the country. This is what Sun Zi said in Chapter 12 Attack by Fire:

It is not surprising that the US Generals did not understand Sun Zi's Art of War well. It is because the English translations did not translate the above correctly. Let's look at some of the translation. The authoritative one is by  By LIONEL GILES and it available here .

So, other translators, such as "The Art of War in plain English By Sun Tzu" edited by A. N. Pearce change it to:
The "cultivate" 修 has been changed to "rewarding" 赏 the deeds 功.

The newer SonShi translation is:
Here, "exploit" is used. This meaning is closer to "cultivate" but it has a bad connotation of plundering the defeated nation and people. Cultivate is in fact a better word. The word 修 has the following meaning of repair, build, decorate, mend, trim. Development of character is 修养 and hence Cultivate is a good word to use.

My Translation:
夫战胜攻取，而不修其功者凶，命曰费留。
After winning and taking over, if it is not followed by rebuilding on the achievements will lead to disaster. The eventual outcome, the destiny,  is called "waste and leakage of wealth".
故曰：明主虑之，良将修之。
Hence, the wise rule will consider it and the smart general will rebuild it.

Hence, victory is the end of a war but the start of a rebuilding phase.

What are there to rebuild?
Besides rebuilding the ruins caused by the war, a major effort is to take care of the defeated people. It is all about how to gain the support of them and how to provide peace, security and development for them. If not, the people will continue the war with sabotages and other rebellion activities and the war will continue requiring the conquering nation to continue to station their soldiers there to maintain order and peace.

So, we can see that true long term victory is not just about winning a war but what to do to maintain peace and development for the people and the ruins after the war in won.

Hence, we can see that in Iraq, perhaps the US has underestimated the needs and difficulty for rebuilding the nation after the war. US has done well in WWII in helping to rebuild Japan and Germany that they became good allies for the US. Such experience point to the wisdom of Sun Zi's Art of War.

The change of names for the Personnel Department over time shows us the trend and the problems as well. The trend shows that Western management thinking is moving towards Ancient Chinese Philosophies and the names show that treating people as resources to be used up in producing products and the bosses' objectives are the fundamental people problems in organization. The Ancient Chinese Philosophies provide the right values and guidance for resolving the people issues.

Looking up Human resource management - Wikipedia, the free encyclopedia shows us that the Personnel Department arised out of the management and labor disputes and was called industrial relations. The oldest known professional HR associations—the Chartered Institute of Personnel and Development go through the following names changes:

The name and scope of work for the People Department can be roughly stated as:
The Trend

Seeing people as a resource like any other raw materials input to be used up in the production to seeing people as an asset, or a capital that can appreciate with investment. This trend treats people more like people with potential to be better, is closer to the Ancient Chinese Philosophies of the relation between the king and his officers. More on this Chinese philosophies later.

The people problems in an organization is to treat people as resource to be used up in production of products and services and to satisfy the boss' objective. Used and discard is the problem. Who want to be treated that way? Seeing people as capital is better but it is still a thing. Can people be treated as people? Not treating people as people creates misunderstanding and improper ways to relate, motivate and handling of people, resulting in lack of performance, engagements, turnovers and even sabotages. 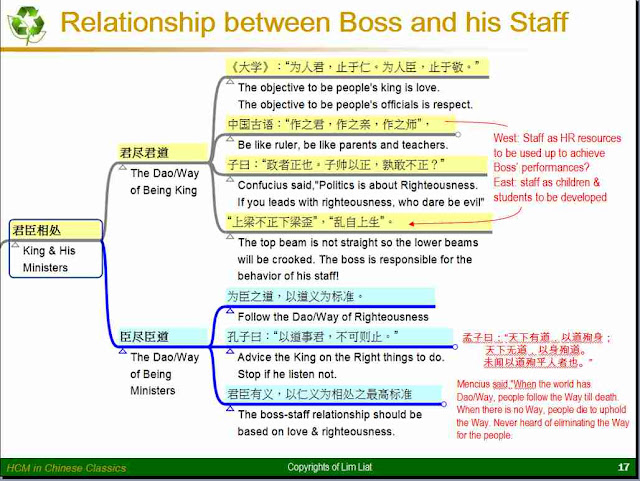 The mind-map above shows the relationship between bosses and their staff and the roles of bosses and staff. It is more like parent-child and teacher-student. Bosses show love and staff response with respect (giving excellent work as an example respect).

If the relationship is wrong, the consequences are obvious. Mencius said it some 2300 years ago as:

How are you treating your staff and colleagues?
Are you a good boss that acts as parents and teachers to their staff with love and discipline?
Are you a good staff that give of your very best in the work that you do inspite of what and how your boss treats you?