The Heart of Management - Assessing the People's Hearts

When we do a search on "What is management", we get the following definitions,

These definitions focus on the how-to of management. The Chinese have a different perspective of management that offers insights.

管理是一种历程， 起点是修己，终点是安人 (https://kknews.cc/zh-sg/career/av9m6vx.html)
Management is a journey, with the character development of self as a starting point, and ending with giving people security.
In the early Tang Dynasty, Li Yifu (Chinese: 李義府; 614–666) who was a chancellor, said that management is actually managing the hearts of people. He wrote a famous book 读心术 Skills of Assessing the Hearts, which teaches us how to assess the hearts of people and with that understanding help us to able to better manage them.
Below is my mind-map summarizing the 10 chapters of his book. The details of each chapter are presented after the mind-map. 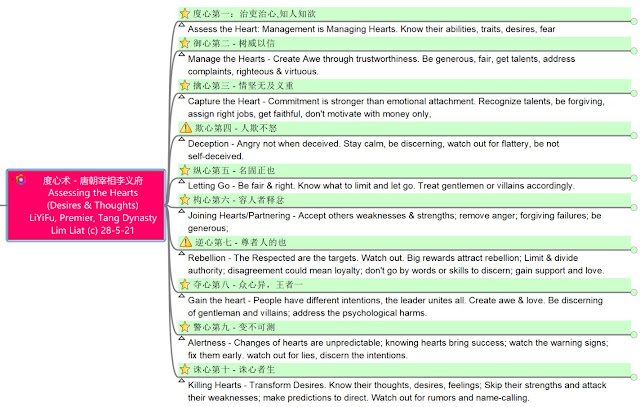 The Full Translation of the Book:
More details are given in each chapter which I find them very useful and so my full translations are provided below:

o   无生则乱，仁厚则安。
Not able to make a living will create chaos. King and benevolence will bring security.

o   民心所向，善用者王也。
The one who can make use of the people's visions will be king.

o   人忌吏贪，示廉者智也。
People hate corrupted officials. Those who show they are not corrupt are wise.

o   众怨不积，惩恶勿纵。
Don't accumulate people's complaints --- address them. Don't be lenient to the evildoers --- punish them.

o   士子娇纵，非民之福，有国者患之。
Letting the scholars be lawless is not beneficial to the people. The rulers worry about such.

o   士不怨上，民心堪定矣。
Scholars not complaining about the rulers, then the people will be contented.

o   严刑峻法，秦之亡也，三代盛典，德之化也。
Too severe punishments were the reasons for Qin's downfall. The success of the earlier 3 dynasties was the result of virtuous character development.

o   权重勿恃，名高勿寄，树威以信也。
Don't count on authority, rely on high reputation, but to create awe through trustworthiness.

o   德不悦上，上赏其才也。
Those with virtues do not try to gain favors of the top. The top recognizes their abilities.

o   才不服下，下敬其恕也。Capability alone does not convince your subordinates. They respect you because of your forgiveness of their errors

o   才高不堪贱用，贱则失之。Those capable cannot be used for small jobs. You will lose them.

o   能傲莫付权贵，贵则毁己。Those with low capability cannot be entrusted with authority. Raising them will destroy you.

o   才大无忠者，用之祸烈也。Those capable but not loyal if employed will create great disaster.

o   人不乏其能，贤者不拒小智。Everyone has no lack of ability. The virtuous will not reject little wisdom.

o   智或存其失，明者或弃大谋。The wise may commit errors. The discerning may neglect to strategize.

o   不患无才，患无用焉。Not concern about lack of abilities but worry about not putting them to good use.

o   技显莫敌禄厚，堕志也。Those capable are not able to fight great rewards. Great rewards cause one to lose aspirations. So don't just use the money to attract them; add other motivators.

o   情坚无及义重，败心矣。Strong on emotional relationships loses out to commitment to righteousness. Emotional attachment will not last.

·        欺心第四 - 人欺不怒
Deception - Angry not when deceived. Stay calm, be discerning, watch out for flattery, be not self-deceived.

o   愚人难教，欺而有功也。The fools are difficult to be taught. It is better to trick them.

o   智者亦俗，敬而增益也。The wise are also common. Respect them and you can gain.

o   自知者明，人莫说之。Those who know themselves are wise. People don't have to tell them.

o   身危者骇，人勿责之。Those in danger are fearful. People should not blame them or else.

o   无信者疑，人休蔽之。Those that are untrustworthy are suspicious. People should not try to hide things from them - tell them the truth is better.

o   诡不惑圣，其心静焉。Trickery could not tempt the saints because their heart is calm and desire not.

o   正不屈敌，其意谲(jue)焉。The righteous do not win against the enemy because they are cunning.

o   诚不悦人，其神媚焉。Honesty does not get favors from people because people prefer flattery.

o   人欺不怒，忿而再失矣。Be not angry when cheated else in one anger one loses even more.

o   功高者抑其权，不抑其位。Those with great contributions should be limited in their authority but keeping their position. e.g. promote successful SBU chief to Chief Research Scientist

o   名显者重其德，不重其名。Famous people should build their virtues and not their names.

o   败寇者纵之远，不纵之近。Let the defeated enemy go far away and not let them stay close.

o   君子勿拘，其心无拘也。Don't limit the gentlemen because their heart has high aspiration. Hire them, give them the mission and let them run.

o   小人纵欲，其心惟欲也。The villain follows their lusts. What they think of is but their unquenchable lusts. So be careful of them, they will do whatever to fulfill their lusts.

o   利己纵之，利人束之，莫以情易耳。Go after what benefits oneself and limit those that benefit others. Never change that because of emotional reasons. i.e. Don't miss the opportunity.

o   心可纵，言勿滥也。Within the heart, we can think of anything but the speech must be controlled. i.e. watch what you say or disclose.

o   行可偏，名固正也。We can commit some mistakes but protect our reputation for righteousness. i.e. be bold to face up & learn from mistakes.

o   富贵乃争，人相构也。Wealth & Power are what people fight for. i.e. know how to compete well.

o   生死乃命，心相忌也。People who think 'Life and Death are in the hands of God' are bitter against one another. i.e. Don't blame God, we are responsible for our life.

o   构人以短，莫毁其长。Using his weakness to attract him and don't destroy his strengths. i.e. that's the principle of partnership - complementary

o   伤人于窘，勿击其强。Attack when they weak and not when they are strong i.e. check first to see if you can win and not anyhow start a war

o   敌之不觉，吾必隐真矣。Even when the enemy knows not, we must hide our truth. i.e. keep secrets and don't count on the enemy will not discover.

o   贬之非贬，君子之谋也。Demoting a person without demoting as the objective is the plan of the gentlemen. i.e.demoting as a means to bring to his awareness of his errors so that he can be better.

o   誉之非誉，小人之术也。Praising without truth is the technique of the villain. i.e. watch out for those that flatter rather than true praise.

o   主臣相疑，其后谤成焉。King and officials suspecting one another will result in rumors accepted as true. i.e. build trust and stop all bad-mouthing and accusations.

o   人害者众，弃利者免患也。Many are harmed by others and giving away benefits can avoid such harms. i,e. be more generous.

o   无妒者稀，容人者释忿哉。Few are without jealousy, so broadly accepting and forgiving others will reduce such bitterness.

o   i.e. treat others well and with kindness

o   利厚生逆，善者亦为也。Big rewards give birth to rebellion. Even the good people do likewise. i.e. rewards increase the greed; don't just use money, use others too.

o   主暴而臣诤，逆之为忠。The king is brutal but the officials' warnings are not rebellion but loyalty. i.e. appreciate the staff who disagree.

o   主昏而臣媚，顺之为逆。The king is a blur but the officials praise. Following them is actually rebellion. i.e. don't be a Yes-man.

o   忠奸莫以言辩，善恶无以智分。Loyalty cannot be discerned by words. Right or wrong cannot be divided by brilliance. i.e. go by deeds, not words nor capability,

o   谋逆先谋信也，信成则逆就。Planning a rebellion begins with gaining trust first. With trust, rebellion can succeed. i.e. trust but set up a system or procedure to monitor

o   制逆先制心也，心服则逆止。To stop rebellion first manage the heart. When the heart is gained then rebellion stops.

o   主明奸匿，上莫怠焉。When the king is discerning then villains hide. The top cannot be lazy. i.e. be on the alert all the time.

o   成不足喜，尊者人的也。Success is not to be happy about because the higher one goes the more is one the target of others.

o   败不足虞，庸者人恕耳。Failure is no reason for worry because people sympathize with the average person. i.e. failure is not shameful but a learning lesson.

·        夺心第八 - 众心异，王者一
Gain the heart - People have different intentions, the leader unites all. Create awe & love. Be discerning of gentleman and villains; address the psychological harms.

o   慑其魄，神鬼服。Destroy his morale or will and he will submit.

o   君子难不丧志，释其难改之。Gentleman does not give up because of difficulty. Getting help to overcome them will leads to success.

o   小人贵则气盛，举其污泄之。Villain when promoted will be boastful and abusive, reporting his abuses will deflate him.

o   穷堪固守，凶危不待也。Poor is still bearable but when danger and disaster strike, one will not be able to keep one's character.

o   察伪言真，恶不敢为。Discover the lies and speak the truth, then the evil person will not dare to act. i.e. Learn to discern the truth.

o   神褫之伤，愈明愈痛。Psychological harms for the wise will be more painful.

o   苛法无功，情柔堪毕焉。Severe punishments work not. Soft and emotional love may solve it.

o   治人者必人治也，治非善哉。Punishing others will result in others punishing us. Punishing is not the best method.

o   屈人者亦人屈也，屈弗耻矣。Giving in to others will also have others giving in to them. Giving in is not shameful.

o   知世而后存焉。Know your society then you may survive. i.e. we must adapt to our environment.

o   识人而后幸焉。Knowing the people first will bring success later. i.e. know who to partner with and know how to match jobs to their talents.

o   人警人者，示以怨也。People use hatred to warn others.

o   畏惩勿诫，语不足矣。Do not refrain from punishments from those who fear because words alone are not enough to change them.

o   有悔莫罚，责于心乎。A repentant needs not be punished. His conscience will bother him.

o   意可曲之，言虚实利也。Intentions could be distorted, lies are made to gain benefits. i.e. watch out for lies, discover the true intentions.

o   诛人者死，诛心者生。Killing a man results in death. Killing the heart brings forth life. i.e. it is not illegal to kill the heart! Better is to transform the heart from bad to good, saving his life.

o   不知其思，无以讨之。Not knowing his thoughts is not possible to attack him. i.e. know their thinking first before any strategizing and attack.

o   不知其情，无以降之。Not knowing their information & situation, no way to get them to surrender.

o   其欲弗逞，其人殆矣。People with their desires not satisfied are very dangerous.

o   行伪于谶，谋大有名焉。Make unproven predictions to give a great plan the proper basis/reason.

o   指忠为奸，害人无忌哉。Accuse the loyal ones as evil and then they can be freely harmed. i.e. watch out for the rumors and name-calling.