Understand the reasons why Apple iPhone 5s and 5c, despite being double the price of its cheaper competitors, do extremely well in China.

Most people expected Apple to sell a cheaper iPhone5 to compete with the cheaper competitors, especially those from China. When Apple sells a lower price iPhone5c with price that is about double that of the Chinese competitors, they got upset and expected Apple to get into big trouble. Apple stock dropped. But Apple iPhones sold 9 millions pieces over the weekend in China and even Apple has to revised its forecast. Many don't understand why. That's because they don't understand the customer's value and behavioral economics. Here is the explanation. 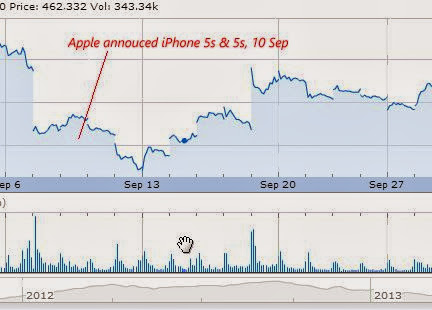 l expect the iPhone 5s and iPhone 5c to do well in China even though there are cheaper and more features Android Chinese phones.  I made such a prediction on my facebook on 12 Sep after reading journal articles that complained that the 5c is not as cheap as the Chinese competitors. See: 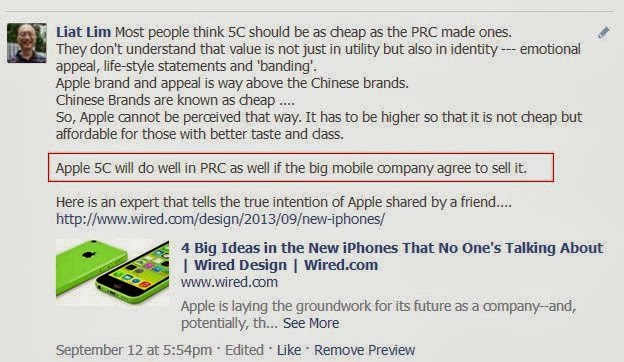 The value of a product has two main factors - the rational or utility factor and the other more powerful one is the Identity factor of emotional appeal, the status symbol and life style statement and significance. Rational factors need only to be necessary, but the Identity factor is the true motivator.
See Innovation Defined

According to Behavioral Economics, the present of 5C makes 5S to be of a higher class and a better status symbol. With Gold color, the preference of Chinese, 5S becomes a real desirable phone to own. For luxury class products, the high price is a key factor besides the design and quality. The higher the price, the more desirable is the product!

With 5C priced lower and higher than the cheaper Chinese local phones, and designed as Funky to attract the younger generation. Owning a cheaper local phones only show one as cheap but owner the more expensive iPhone 5C shows one has taste and class. Will you still buy the Chinese phones? Only if you can't afford the higher priced and higher class iPhones which prove Apple's point.

Once we have a correct model about the value of any innovation and the behavioral psychology of the consumers, we can roughly predict the outcome, of success or failure, of the innovation.

An Opposite Illustration - The Tata Nano
Tata Nano was to be the cheapest car that the poor can afford to have. About the vision of the Ford Model-T, car for the masses (or at least the middle class). But it is now reported that Nano was a failure. See for example The Tata Nano Failed Because It Was Too Cheap, or what went wrong with tata motors nano and WSJ A look into why the world's cheapest car flopped:http://on.wsj.com/1hT3YRf.

A key point is that the bike/scooters don't want to buy 'cheap' car, and they rather buy a used better class car.

“It turns out that those climbing into India's middle class want cheap cars, but they don't want cars that seem cheap—and are willing to pay more than Tata reckoned for a vehicle that has a more upmarket image.” from  The Tata Nano Failed Because It Was Too Cheap.

We must therefore understand that customers value has at least 2 factors of utility (cheaper, faster, better, safer, easier and longer lasting) and identity ( of style, status, and significance); or economic and social value.