Two Types of Goods & Their Economics

Conventional economics teaches about the supply and demand of tangible physical goods. Tangible goods are consumables and they get less when used.  It is a scarcity mindset of fighting for bigger share of a fixed pie. There is another type of goods, the intangibles, such as information, software, skills, talents and emotions like love and joy, that do not get consumed when used or shared. They work on a different economic law, the law of network effect when the more it is shared, the greater is the total benefits. The abundance by sharing law can be applied to the scarcity economic laws to increase the production of a much bigger pie. It is one of the key factor for the economic of scale. Consider this law of abundance by sharing in your next decision making to open up your innovating mind to create more by sharing and using less. Consider open sourcing and crowd sourcing etc.

Two Different Types of Goods with Different Economic Laws
There are two main categories of goods - the tangibles and the intangibles.

Tangible Goods and Scarcity Mindset
The tangible goods tend to be also consumable --- it gets less and less when used and gets used-up. When one person uses it, there is less for another. It is the famous sharing of the fixed pie. A whole set of economics laws is dealing with this kind of goods. (There is another type of tangible goods such as a National Park, where it does not get less that fast with additional people, but it will break down due to congestion and destruction when too many people use it at the same time.)
This scarcity brings forth the concept of opportunity cost. If I use it do this will prevent me from using it to do others. It bring forth the problem of distribution. Who should get more or less of this limited amount of goods.

Intangible Goods & Abundance Mindset
There is these other kinds of goods, the intangibles, such as information, software, talents and even emotion such as love, courage and joy. These kinds of goods are Non-consumable - they don't get used up when use. They can be used at the same time concurrently with many users and non get lesser of the goods. In certain time, there is this network effect of greater total value when more people use and share it. This "Abundance by sharing" also works in the tangible goods economy by increasing the production effectiveness and efficient due to sharing of skills. The economic of scale of the scarcity based economy is not just the outcome of the sharing of a fixed costs over greater quantity of units of production but also from improvement in the production methods due to better knowledge.

More details can be found in the following mind-map: 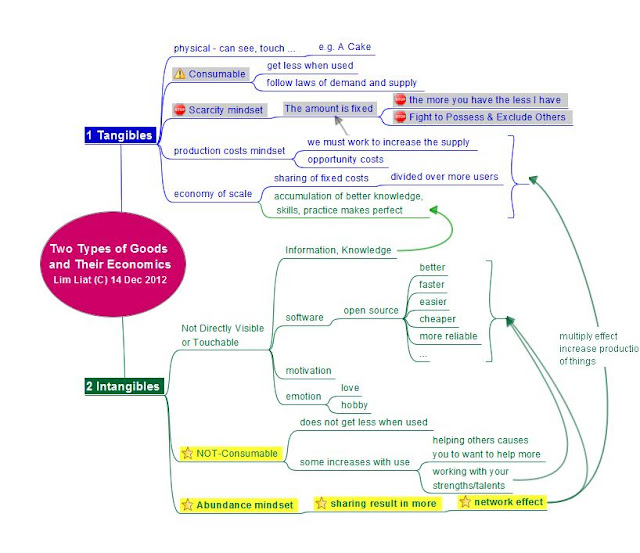 Next time in your decision making, remember this law of "Abundance by sharing" or "Sharing to get more for everyone".