Do you think Microsoft Surface can surface? It is a bit late and yet without any killer attraction. Surface RT is a catching up game and Surface Pro is a competitor to itself Ultrabook. What do you think?

Will Microsoft be successful in its tablet war against Android and Apple ? It is fun and a good learning experience to predict the future. It tests our thinking framework. If our thinking framework is right, we should be able to predict the success or failure of the new offering. Even if our prediction turns out to be wrong, we can go back to our framework and make the necessary adjustments and updates so that we can be better the next time.

When in April 2010, HP bought over Palm WebOS for US$1.2B to enter into the smartphone and tablet market, I wrote a post in 3 May 2010 Smartphone Wars' New Force: Hewlett-Packard & Palm - Is that so? saying that it was not likely to be successful. In the post, I have a paragraph titled "When has putting two losers together makes a winner? ". HP surrendered one year later in Aug 2011. Last time, the two losers were Palm and HP. This time, will the two losers be Microsoft and Nokia? At present indications, it seems to be on the track of to be so.

Microsoft Surface Tablet
Firstly, the name 'Surface'. Do you like it? Is it signifying that they are coming to the surface to catch a breath of air after struggling against sinking for sometime? Many people think that this Window-8 OS is Nokia and Microsoft, at least for Nokia, last chance/bet, for survival.

MS Surface has two models, Surface-RT is to address the war against iPad and Android tablets, running on the same class of ARM processors using the Window-8 OS. Surface-Pro is the tablet version of the Intel-based processor and will run the PC based software. It is not new. It was the failed window PC tablet announced by Bill Gates about 10 years ago in new form factor.

So, Microsoft is trying to address or to protect two markets, 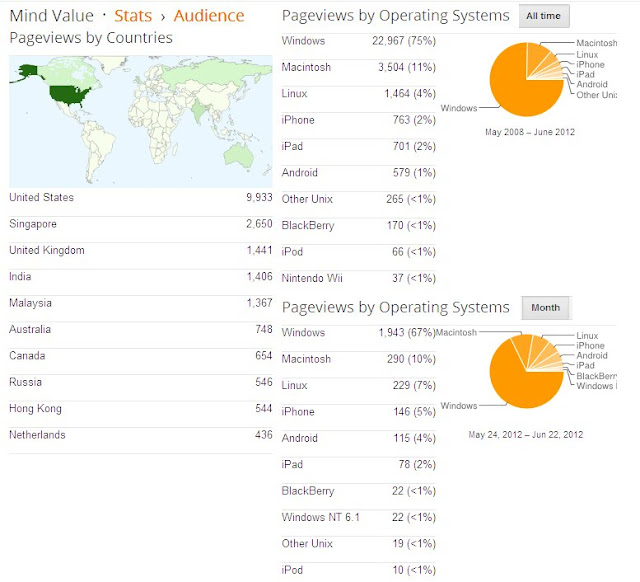 A key and interesting trend is to the rise of Linux, iPhone, Android and iPad. This is clearly telling us that more and more people are using their phone and iPad/Tablets to access the internet.

Predictions
I personally felt that the Cloud devices of phones, tablets and laptops and desktops will be polarize into two main categories:
Clay-Christensen's Disruptive Innovation Theory warns incumbent enterprises to watch out for over-shotting customers needs and open up an opportunity for new disruptive entrants. Microsoft may have taken the advice to defend this low-end market. But it may be too late and too little (no killer value-vector proposition). Even for Intel, which has taken Clay's advice seriously to introduce the celerion chips to protect its low end processors market against AMD and other clones 10 years back, its future is of concern as well with the rise of the smartphone and tablets using its competitors' ARM based chip sets. The ARM chips produced by different chip makers like Samsung, TI etc are the dominate players here. With ARM 64 bit coming into the market, Intel own turf is under attack.

Not that Microsoft or Intel will not go away very soon but their influence will be greatly reduced and will not be like before. They may be pushed to the higher end business of the servers and infrastructure of the clouds which are nonetheless big markets.

Please share your valuable insights and opinions with us.

Microsoft writes off nearly $1B to account for Surface RT bomb ...

That was a great detailed analysis about the users of different handheld devices and corresponding operating system. I would agree that there is a huge fall in terms of windows users because year 2011-2012 there are lots of android devices being launched that's why we can see that there are lots of android OS browsing the internet. On this year ahead I'm sure lots of tablet lines will be introduce in the market and one of the best will be the microsoft surface tablet pc

Yeah even the co-founder Steve Wozniak wants to own Microsoft Surface. He has praised this gadget a lot. Hope that this Microsoft will beat Android based Nexus tablet.