There are two basic thinking framework that I find very useful.

The first is the popular 5W1H framework or Why, What, When, Who, Where and How. When I encounter an issue, I will start with finding the answers for the 5W1H. (See The Basic Thinking Framework 5W1H).

The other powerful thinking framework is the Ancient Chinese Yin-Yang framework (from I-Ching). (note: A more comprehensive innovative thinking method is BVITS).

Yin-Yang Thinking Framework
To a Chinese, the Yin-Yang concept is ingrained in his thinking. For a healthy body, there must a balance of Yin and Yang. Yang relates to masculine and Yin relates to famine. Foods are classified into Yang (heaty), Yin(Cooling) and Neutral (Balanced) types. Fried foods are heaty, the Yang type. Most fruits are cooling, the Yin-type. If the body is too heaty, then one needs to take the cooling food staff like fruits, or tea (most common type).

Such Bipolar Yin-Yang Concept provides a good thinking framework.  Here is a mind-map: 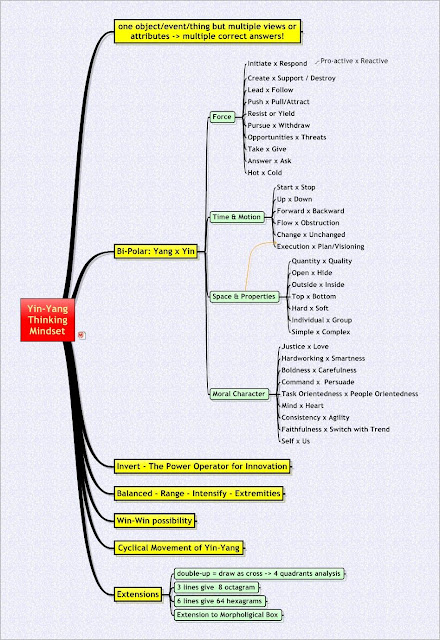 Bi-Polar Concept - Opening Up the Options
﻿
Any thing or event can be viewed from multiple angles. There should be at least 2 extreme points of view if not more. There is no one right answer. It depends on the situations, timing and the people involved. For any property, we can find the two extremes. Physics tells us there is the particle and its anti-particle. For every force exerted there is a reactive force in the opposite direction. Light is a wave and is also a particle. This is the yin-yang concept. We can push, or we can pull. We can move, or we can stop. We can start-stop endlessly over time. In the mind-map above, I classified the yin-yang framework into 4 categories of force, time&motion, space&properties and character values. By going through them, it opens up lots of options that we can choose.

Invert - The Power Operator for Innovation
With the Bi-polar concept, we can easily come out with the invert operator. For every idea, we can ask what, the opposing idea, the mirror image or the switched idea is. All the creative thinking methods that I have studied always have this invert operator.

Balanced - Range - Intensify - Extremities
The Yin-Yang concept does not just have 2 extremities or two poles. Discretely speaking, there is the balanced , mid-point or neutral position. It is actually tri-states, Yin, Yang and Neutral/Balanced. But why should we be restricted to discrete values only? We can have a range of values. If we have a range, then we can intensify, increase the value, of the parameters, even to the extreme points in either direction. Thinking like this open out a big wide range of possibilities. We need not stop at a dimension but have multiple dimensions too.

Win-Win for All
There is not need to be forced into an either or position. We can move into a position where we can have the best of both worlds. That is the true objective and spirit of innovation - never a compromised but a break-through. Breakthrough can be achieved over the I-Ching teaching of time and position(space), properties and people.

Cyclical Movement of Yin and Yang
On its own, things progresses in cycle. What goes up must come down. The cyclical change of states tells us that we need to monitor the changes and proactively take actions to prevent, resist, delay (the yang way) or just follow and ride on the trends (the yin way). In whatever phase of an economic cycle, there are always winners and losers. We just have our mind set to be alert and prepare to convert the threats (yin) into opportunities(the yang).

Hope that our mindset is opened with possibilities with the Yin-Yang thanking framework.

Read about a more basic thinking framework in The Basic Thinking Framework 5W1H.

Confucius said,
"At a height yet can come down to the low,
full and yet as if empty,
rich yet is thrifty,
honorable yet is able to be humble,
wise yet as if dump,
bold yet as if fearful (and hence cautious),
different yet can accept,
has great depth yet as if shallow (able to make complex thing simple to understand),
bright and yet can be dark (not showing off, overshadowing others).
This means one can be less and not go to the extreme.
Those who could do this must those that have high moral character.
I-Ching says "Not wanting to sacrifice and only to gain will result in loss.
Giving of oneself instead brings great gain."

Yin Yang vs Dualism vs Delectics

Yin-Yang is different from Dualism or Delectics in the following ways:

1. Yin-Yang comes from the same Dao.
Yin and Yang are but two opposite attributes of the same thing. They are the two sides of the same coin. The head is yang, and the tail is yin. The ancient Chinese use the palm of the hand as an illustration.

3. Yin and Yang are Complementary.
Dualism and Delectics(thesis and anti-thesis) are in opposition against each other. Yin and Yang complement each other to create the proper balance for the growth of the whole. They are harmonizing forces rather than confrontational. Yin does not overcome and remove the Yang or vice versa. They are there for each other. In fact, there is Yin in Yang and Yang in Yin because they come from the same source. They are the attributes of the same entity.

So in Marxist' Delectics where there are the conflicts of employers and the employees and the eventual overcoming of employees over employers. In Yin-Yang mindset, employers and employees exist for each other ---- for the survival and the growth of the company. Employers are in someway the employees of the Company. Employees are in someway the owners of the Company. Each has its role to play out for the benefit of the whole Company. Each sees the contribution of the other and value the other, working at his best, to serve each other, for the shared ownership of the company.

Just read this from FaceBook friends:
Yin-Yang is one cannot exist without the other.
Vision without action is a daydream.
Action without vision is a nightmare.