How to guard against the abuses, misuses and stupidity of man in an organization? By institutionalization of good practices and drawing up a set of laws for rewarding good and punishing  bad behavior.  Such carrots and sticks system is a key factor in the unification of China into the Chin Dynasty and was the teaching of Fa School advocated and popularized by Han Fei Zi. Learn the details.

The teaching of the Fa School (Legalists School) can be easily summarized into the acronym 2H3K Two Handles and Three Knives. The two handles are the carrots and sticks of rewards and punishments. The Three Knives, the power tools to achieve the ruler's objectives, are power, stratagems and laws (legal systems).  It is shown in the mind-map below: 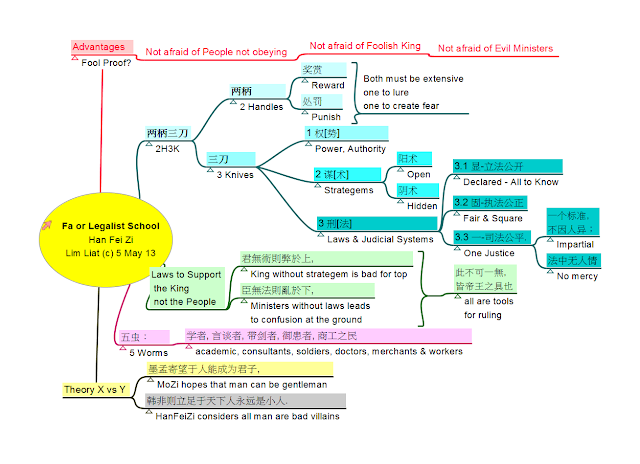 The objectives of the proposed is to ensure common people obey the laws by fear of punishments (usually very severe), to ensure managers do good as motivated by the huge incentives and do no evil as prevented by clearly defined laws and punishments, and to make sure the country works as in the past against the possible arisen of a foolish king.  The is a human-being error proof system.

Han FeiZi assumed that people are basically villains and must be motivated by rewards and threaten with fear. People are not moved by love but by fear. This is like the Theory X Management Principle. Whereas MoZi's equality, mutual love and support based philosophy assumed people to be gentlemen (Theory Y).

Han FeiZi's system is to support the king. The laws are drawn as such to support the king and not the people. It therefore will lead to the rule of the tyrant. It is effective in enforcing laws and order in the short run. But it is subjected to misuse.  The laws are the means to get people to toll the line set by the ones with the Power (the King) and the ones who win by stratagems. The teaching of the use of stratagem to rule is very much like the teaching of "The Prince" by  Niccolò Machiavelli. Use stratagem to gain power and then set up the system of laws to enforce obedience.

There are however, many other useful lessons we can take from Han FeiZi. Such as the Laws must be opened and made know to everyone first. The Laws must be applied consistently and fairly to all. There must be only one system and every one must follow it. There is no consideration for relationships and compassion.

Does the system proposed actually foolproof? I think not. Because we always need the 'judge', a man, to decide whether the laws have been violated and the amount of punishment or rewards to be given. The Judge of course is appointed by the one with the power and he who has the power can then distort the judgement or change the laws to suit his purposes. Hence, it is important that the jurisdiction and the  political systems of power be separated. But this is not easy even in this modern day of democratic governmental system.