The uniqueness of Singaporeans is best described by what others say about us. The four Kia's of Kia-Su, Kia-Si, Kia-Po, Kia-ZhengHu described Singaporeans quite well. Comparing them against the ideals of Singapore as described in the National Flag and the daily Pledge, we, Singaporeans are doing quite well. We are recognized as "Progressive, Ethical, Law Abiding, Family Centric, Harmonious, Clean (physically and governmentally), Efficient & Working Systems and no-fooling around 'Fine' city nation.

If you ever been asked by your foreign friends about what Singaporeans are like, I think the best answer is the 4 Kia's of Kia-Su(afraid to loose), Kia-Si(afraid to die), Kia-Po(afraid of wife), Kia-ZhengHu(afraid of Government). Most people see them as negatives. I see them as rather positive values and show how much we have come to achieve the ideals that are represented in our National Flag and our daily pledges recited in schools.

For ease of understanding and grasping the big picture and details at the same time, I have them mapped in a mind-map format (as done in most of my writings. I am a proponent of getting rid of exams but submitting home work in mind-map formats that clearly show your understanding of the subject matter. Sorry for the slight deviation) as follows: 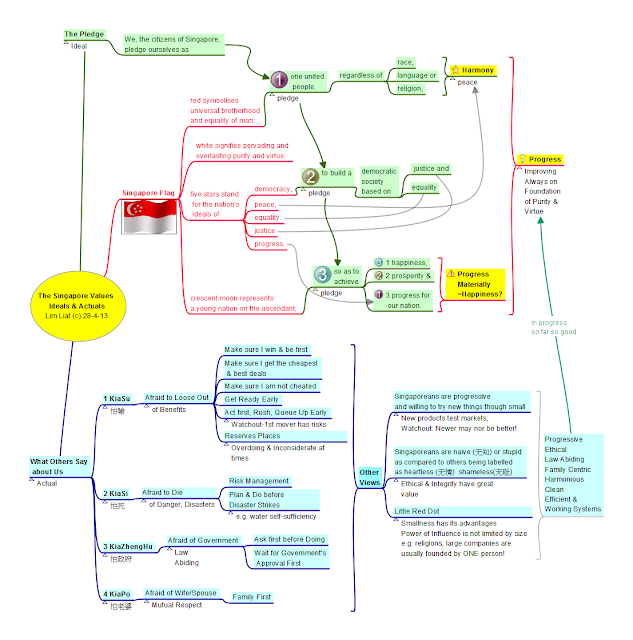 1. Our Pledge expressed most of the virtues represented in our Flag.
The only issue I have is the order of importance .... the pledge has it as "so as to achieve happiness, prosperity and progress", which I agree is the right order. But the actual order I think we are promoting is more prosperity first (as led by the government high salary policy) , progress and happiness either last or being equated with prosperity or material abundance.

2. The 4 Kia's has some problems at times but generally they are positive values and virtues!
KiaSu, afraid to loose could be at times expressed as inconsiderate, selfish, rushing and 'jopping' (reserve) of seats and things. But it is good in keeping the people progressive.  Kia-Si, afraid to die, is a good attitude for risk-management and preparing in advance before a disaster strikes. Kia-Po, afraid of wife, is good for having a harmonious family, especially the afraid, better translated as respect, is also reciprocated by the spouse. Kia-ZhengHu, afraid of Government produces law abiding citizens. It underline the fact that Singapore is a society of law and order. It is not only a garden city with cleanliness, but the cleanliness extends to the way people do business with one another.  We are so ethical centric and law abiding that we are at times described as '无知' naive or a fool, whereas certain people are described as 无情 heartless or worse 无耻 shameless.

Our progressive attitude helps us to overcome some of our fears. Others laugh at us in Singapore, point out that when we want to do new thing, the first question we ask is "Is it legal?" or "Have the government approved it?". For others, it is do first until the government says no.

Such interaction of factors result in a Singapore that is Progressive, Ethical, Law Abiding, Family Centric, Harmonious, Clean (physically and governmentally), Efficient & Working Systems and no-fooling around 'Fine' city nation.

The Cracking Signs
Things have been working well for Singapore for many years until the recent events of frequent MRT breakdowns, flooding in Orchard Roads etc.  These are tell tale signs of some deeper issues in the Nation, in the attitudes and systems. Personally, I feel we have place too much emphasis on 'money' things and neglected the other fundamental issues of the heart, serving and doing excellent work because it is so not because it pays higher, as represented in your flag of red(brotherhood of all people) and white (virtuous and purity) and the five stars.

The 'prosperity' in our pledge has been unfortunately equate with money wealth. The equivalent Chinese word used is “繁荣”, which is make up of 繁=many varieties 荣= blossom gloriously. It should be a flourishing and blooming in multi-dimensions of things, tangibles and intangibles, of cultural richness, besides money wealth.

May we reflect on our values and make the necessary adjustments to build a nation of people that have the ideals represented in our flag and pledges.